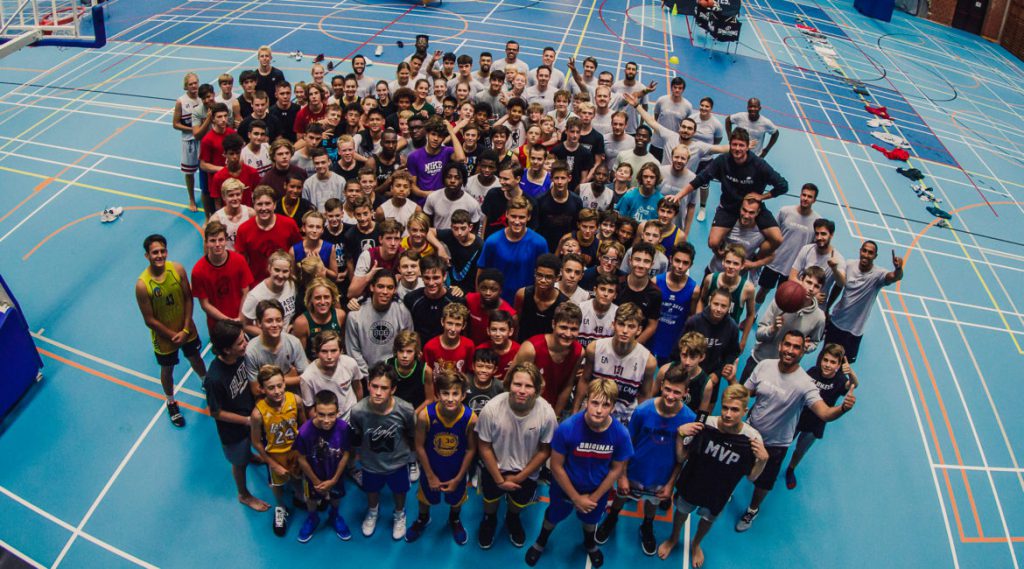 During a 6-day sleepover camp hosted by Elite Athletes, all of our Academy players had the chance to work with players and coaches from around the globe. There were coaches and players from 15 different countries, ranging from Austria to the United States of America. It was the best edition of the camp yet, with over 130 players attending and 30 coaches and crew giving their all for the whole week.

Our players did 4 stations of 20 minutes every morning, with the topics ranging from defence with Defensive Coach Michael to skill work with Coach Jonas. The players were grouped into age and playing level groups to maximize transfer to the game and intensity. There were also 2 stations focussed on athletic development & strength, lead by Olivier Goetgeluck and Ilyach Ouattara.

After the stations it was time for lunch and recovery. The crew did a great job throughout the whole week, starting at 7 AM to prepare our breakfast and finishing at 8 PM with all the cleaning up and preparations for the next day. The players loved it!

Next it was time for the part of the day all the players were looking forward to: Summer League Games! In a NBA-Playoffs format the different NBA Teams battled it out in their respective age group, looking to win the championship. Prior to the games, the coaches drafted their players based on their qualities and the team they wanted to assemble. There was a great, competitive spirit during the games but despite this all the coaches focussed on giving everyone equal minutes so that they could all enjoy the game. It was a great experience for the players, playing against others from different countries and different playing styles. For the coaches, it was a delight to see that as the week progressed, the players started using the moves that they learned during the stations. It’s always great to see the moves you practice on, transferring to the game. All-around a great experience for the players and coaches!

During Elite Europe, Athletic Director of the Academy Olivier Goetgeluck lead the warm-ups and cooling down before and after every session. He always has a way of grasping the attention of everyone in the gym with his calm voice & demeanor, focussing on all the small details during his sessions to prepare the players for the sessions or for their recovery. Besides doing warm-ups and cooldowns, Olivier also lead a session “The Form” in the morning and meditation late in the evening, before the players went to bed. Although these sessions were optional, a lot of the players woke up early to go to The Form and awaken their muscles and mind with Olivier.

Besides basketball we also had daily player workshops given by coaching staff or professional players. Domien Loubry gave a workshop about how he changed his mindset for the better during the younger years of his career, which resulted in him playing at his best and focussing on his wellbeing. He emphasized that it’s crucial to have your mind right in all aspects of your life and career, even beyond basketball. It helped him become a better overall person and to focus on the task at hand. After the session the players were able to ask questions and pick the mind of Domien, getting to know his habits and what he does pre-game but also how he felt after he finally made his break-through in basketball.